The Brilliance of René Lalique

Ever since the secondary market for Art Nouveau and Art Deco furnishings first took off in the Swinging Sixties, René Lalique (1860-1945) has enjoyed a special place in the hearts of collectors.

Put simply, Lalique glass has come to epitomise the glamour of the inter-war period.

Part of Lalique’s success, and the timeless appeal to a truly international audience, is the sheer variety of objects, from scent bottles to the bespoke fittings of a trans-Atlantic cruise liner. Subject matter, based in the wonder of the natural world, was equally varied. And so too are price levels.

The auction record for Lalique currently stands at €1.75m (£1.59m) bid in 2011 for a pair of sparrow-decorated doors, Porte Moineaux, once owned by Florence Boot, Lady Trent (of Boots the Chemist fame). Contrast this with the many pieces by the world-famous brand available for under £1000.

PM Antiques & Collectables currently have a number of textbook pieces for sale at affordable levels. Priced at £500 is a frosted and opalescent 24cm diameter bowl in the Chicoree pattern. Proprietor Phil Mires explains it was among the first designs created in 1921 – the year Lalique moved production from Combs- La-Ville near Paris to a much larger factory at Wingen-Sur-Moder in the glass-making region of Alsace. “It’s one of the firm’s more understated designs and a great entry level piece” he says.

Form, pattern, colour and date have become the key elements in the pricing of vintage Lalique.

While some Lalique pieces are unique (the so-called cire perdue works created by the lost wax process), most were made in multiples. Many pieces will be catalogued with a number – corresponding with how they appear in the René Lalique catalogue raisonne by Felix Marcilhac published in 2011.

The appeal of vibrantly coloured or opalescent glass over clear and frosted glass helps explain why two apparently similar items can be priced quite differently. Likewise, pieces made in Alsace during René Lalique’s lifetime (typically signed R. Lalique) are more generally desirable then those made under his son Marc Lalique in the post-war era (signed Lalique France) or pieces by Lalique Cristal, the modern-day Swiss-owned factory.

“There’s plenty of demand for pieces from all three periods of production but – as some designs were made for many years – it does pay to know exactly what you are buying” says Phil Mires.

A typical piece with the R Lalique factory mark is a 31cm Villeneuve pattern frosted and opalescent bowl moulded with swags of fruiting foliage, a design first issued in 1928 (illustrated above). PM Antiques & Collectables are asking £900.

From light fittings to vases there are many categories of Lalique to collect. A distinct subset of the market is occupied by the extraordinary series of bouchons de radiator – aka car mascots or hood ornaments. With the aid of a metal mount and the new power of electric light, these could be fitted to the radiators of a luxury sports car and illuminated.

These have obvious cross-over collecting appeal to car enthusiasts who add significantly to the collecting base. Lalique mascots often appear for sale as part of automobile and classic car sales rather than specialist sales of Lalique and art glass.

Lalique produced a total of 31 different mascots in the six years between 1925, the year of the landmark Exposition des Arts Decoratifs in Paris, and the grip of economic depression in 1931.

Amassing a complete collection is a near impossibility as it requires both enormously deep pockets and access to two great rarities. Reynard, a leaping fox mascot made in very small numbers, has sold for more than $250,000 while Lévrier 1, a variant of the classic greyhound model designed in 1929 for Prince George, the future Duke of Kent, is deemed a one-off. The only known example was rumoured to have changed hands in 2016 for over $500,000.

Most of the other 29 mascots are a little more accessible. PM Antiques & Collectables currently have five examples in stock, ticketed at between £1500 and £8000 each.

At the lower end of that price range is Tête de Coq’ (Head of a Cockerel), a clear and frosted 17.5cm high mascot first introduced in 1928. It has some repolishing to the comb.

Most Lalique mascots were made in colourless glass but another avian model, the 20cm Coq Nain (Crouching Cockerel) also from 1928, comes in a rare ‘fire-glow’ topaz tinted finish. Also with some repolishing to the tail feathers it is priced at £2500.

PM have two examples of the Naiade (Large Mermaid) model. This 13cm statuette was first marketed in 1920 as a desk ornament or paperweight but was used as a car mascot from the launch of the range in 1925. Priced at £3000 is a cast in clear and sepia coloured glass that is signed R Lalique both in the mould to the tail and again in engraved lower case script to the base.

A rarer example of the same figure in an opalescent finish is offered in very good overall condition for £3500. 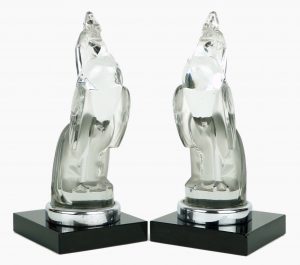