Hello and welcome to our summer newsletter.

I’d like to begin with a big ‘thank you’ to all who have taken time to browse the site in recent months. Via pm-antiques.co.uk we have been open for business throughout the lockdown period. I’m very conscious not everyone is so fortunate. At what is traditionally a busy time of year for buyers and sellers of antiques, many key events have sadly been cancelled.

The past months have been surprisingly busy, particularly for new acquisitions. 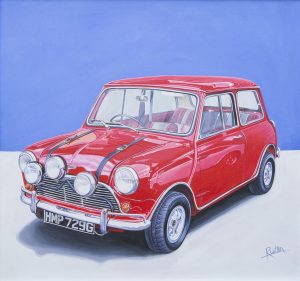 A striking new addition to our contemporary art department are two acrylics by Roz Wilson (b.1960). A former graphic and clothes designer who now resides in the Surrey hills, classic cars are Wilson’s subject of choice. Her renderings of a fire-engine red 1968 Mini Cooper from The Italian Job (illustrated right) and a 1959 Mark I MGA 1500 look almost as good as the real thing. They are great value original works at £1000 each.

Another new addition to our contemporary art department is an ink and gouache study of a standing female nude by the Scottish Royal Academician William Gear (1915-1997). Signed and dated ’37 lower right, it dates from a key period in the artist’s career when, while travelling Europe under a scholarship from 1937-38, he studied under Fernand Léger. In the post-war era, Gear moved towards abstraction. As implied by a lot label verso, this vibrantly coloured work on paper was previously sold by Bonhams 20 years ago as part of a collection of Gear’s work from the estate of fellow artist Rendall Wells. It is offered professionally framed and priced at £1000.

Our other recently acquired works of art include originals by Simon Kenny, Duncan MacGregor, Michael Lyne and Andrew Beer, and signed colour prints by L.S. Lowry and Snaffles (Charles Johnson Payne). All of which can be found via our online store. 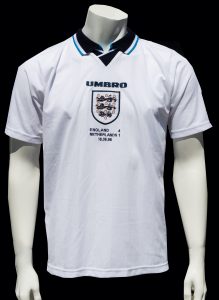 There may be no UEFA European Championship this year – those of you with tickets to Euro2020 will have to wait until next year – but that hasn’t dampened the appetite for British football memorabilia. We’ve recently sold a large collection of memorabilia from Euro96 (a few pieces of rare corporate merchandise, including a branded Motorola mobile phone priced at £100, still remain in stock) and have also taken delivery of around 100 Bishop Auckland AFC match day programmes from the 1940s and 1950s. These were glory years for The Bishops featuring several Northern League titles and an unprecedented run of victories in the Amateur Cup. Some of the programmes, priced at £20-50 each, relate to the 1954-55 season that was the best in the club’s history. 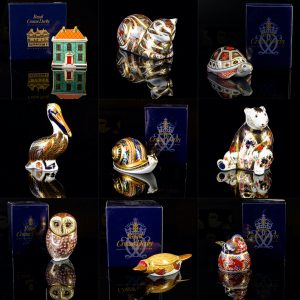 For those not lamenting the hiatus to the football season, a menagerie of Royal Crown Derby figural paperweights (a selected few illustrated right) will be more likely to raise a smile. Recently acquired from two private collections, all are offered excellent condition, and many accompanied by original boxes and certificates of authenticity. Some of the limited edition pieces are not easy to find, such as the swimming Platypus from the Australian collection made in 2000.

And our catalogue of private collections doesn’t end there as we’ve also just taken in a large number of photolithographs and screenprints by Eduardo Paolozzi (1924-2005), as well as vintage toys including Pelham Puppets and model boats by Tri-ang and Sutcliffe respectively. 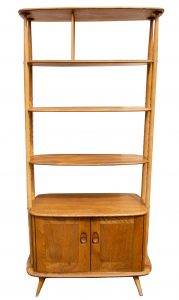 If you fancy getting all dressed up with nowhere to go, then check out three pieces of silver and enamel jewellery by sixties maker David Lawrence (£200 each), or if lockdown gardening is your thing, don’t miss some suitably weathered stone and composition stone garden urns just arrived from Berkshire.

Those looking to enhance the appearance of their home will be interested to learn that we’ve also added to our range of furniture and decorative interiors. One particular piece worthy of a mention is a 1960’s Ercol beech and elm ‘Giraffe’ room divider (illustrated left), priced at £1000.

You can browse our latest range in its entirety here.

As a footnote, it might just be that you have decided to part with similar collectables while having a good old clear-out during the lockdown period. If you are looking to sell, then we are always keen to add to our eclectic range. We offer a free quotation no obligation service. 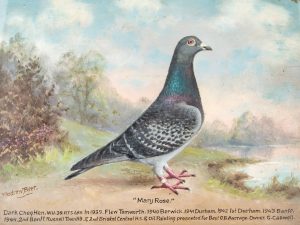