For those who cannot afford an oil by Laurence Stephen Lowry (1887-1976), then a limited edition print produced with the permission and oversight of the artist or his estate is a welcome and more affordable alternative. For those who bought just a few years ago, they have also proved a sound commercial investment.

“Prices for original Lowry limited edition prints have tended to follow a similar trajectory of Lowry’s paintings” says Phil Mires, founder of PM Antiques & Collectables. The online retailer has sold a number of prints by the ‘matchstick man’ in recent months and is always looking to buy and sell in this niche field.

“Lowry’s work really needs no introduction – he is perhaps the best-known British artist of the 20th century and his pictures are immediately recognisable” says Mires. “But rising prices also reflect a general resurgence of interest in Northern school of 20th century artists that has aided the commercial fortunes of painters such as Sheila Fell, Fred Yates and Norman Cornish.”

The price rise has been relatively steady across two decades. There were suggestions three of four years ago that prices had peaked but in the past year alone there have been a number a record sums paid at auction for good impressions of the most desirable works. A copy of the classic football crowd scene ‘Going to the Match’, from an edition of 300, published by The Medici Society in 1972 sold in the print for £26,000 – a new auction record for any Lowry print (the previous high was £22,000 bid in 2015 for another version of Going to the Match). It is quite possible to buy a good Lowry drawing for a similar sum.

Mires emphasises that Lowry limited edition prints are quite different from the many standard reproductions of Lowry works that, printed in many sizes and in open editions, have little more than decorative value. He considers Britain at Play, a print after the oil of 1943 recently sold for £3700 (illustrated top). “There’s a lot of information that confirms it is a genuine Lowry print – it has the Fine Art Trade Guild blind stamp lower left. It is signed by the artists in pencil lower right while the number 402/850 indicates the print number and the edition size. Information you won’t find on the print is that was published by Mainstone Publications of Norfolk and printed by Beric Press in Sussex.” 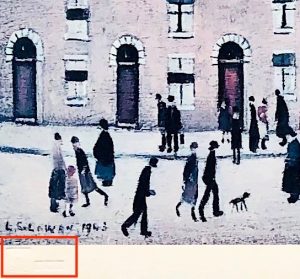 All bar a handful of genuine Lowry prints are ‘blind stamped’ (as illustrated right) into the paper typically by the Fine Art Trade Guild – the trade association founded in 1847 to monitor standards in print publishing in fine art. The stamp typically appears on the bottom left of the image if the print is signed by Lowry and to the centre to unsigned prints. The one exception are the two mill scenes published by Sunday newspaper The Observer in 1972 in editions of 750 each. These prints, one signed, the other unsigned, are without FATG blind stamps and also lack edition numbers. A signed example was recently sold by PM Antiques & Collectables for £3900.

Lowry prints were published (promoted and sold) by a large number of galleries and institutions – more than 20 have been identified. Some firms such as Venture Prints, and the Adam Collection producing numerous prints and others produced just one or two.

The actual printing was undertaken by a number of fine art specialists including the Curren Press, Beric Press, the Cavendish Press, the Austrian firm Max Jaffe or Wolfsensberger AG of Zurich.

Artist and publisher could choose both the size of the edition and whether the prints would be signed.

Using a soft pencil (or occasionally a ballpoint pen) Lowry put his signature to the margin of over 35,000 lithographs and reproduction prints of at least 70 of his paintings and drawings during his lifetime. Although some of the images were painted as early as the 1920s, most of these prints were published in his later years – typically the 1960s and 70s.

As many as 33 of the edition prints were unsigned, some of them produced posthumously with permission from the Lowry estate.

Most were created in runs from 300-850 but there are exceptions. Among the earliest of Lowry prints is Punch and Judy printed in 1947 as part of the Brenda Rawnsley’s School Prints project. Printed in a large edition of 6000 they were sold for around £3 each. It was later reissued in 1972 as a signed print in a run of just 75. The original painting of 1943 sold in 2018 for just under £1m. The smallest runs were the series of 16 monochrome lithographs published in editions of just 75 by Ganymed Original Editions in the 1960s. The simple matter of demand and supply marks these among the most desirable of all Lowry prints however they are also – in art historical terms – among the most interesting. Lowry created the drawings specifically for the project.

A lower or higher edition number doesn’t always mean a higher or lower selling price. Some of the most desirable prints are in editions of up to 850. Accordingly, the images are just as important and so too is condition. “Some of the prints are prone to fading and this can impact value. An original frame is also a bonus” comments Phil Mires.